General information about the Institute

and creation of magnetic transport, other new and non-traditional transport systems and technologies, their individual components and structural elements, rolling stock, onboard power supplies and autonomous energy supply systems. mobile and stationary facilities, as well as means of diagnostics and ensuring environmental, medical and technical safety of transportation of passengers and cargo and operation of power equipment, to bring scientific and scientific knowledge to the stage of practical use, training highly qualified scientific personnel, social, economic needs and innovative development of the country.

Under his leadership, the Department continued and intensified theoretical and experimental research on three main groups of problems in the field of new transport technology:

The main magnetic levitation vehicle for ground transportation near the earth with cruising speeds of 350-800 km / h is neither rail nor air, although in essence it is a low-flying directional device that uses, unlike aircraft, magnetic interference (magnetic effect). electrodynamic levitation based on the use of permanent magnets or electromagnets or superconducting devices, as well as the effect of electromagnetic traction and braking by linear drive) and aerodynamic interference (screen effect) of rolling stock and the supporting surface of the guide conductive path with linear synchronous drive.

The main results obtained by scientists of the Department at the beginning of the 91st year and in the first half of the 90s are as follows: 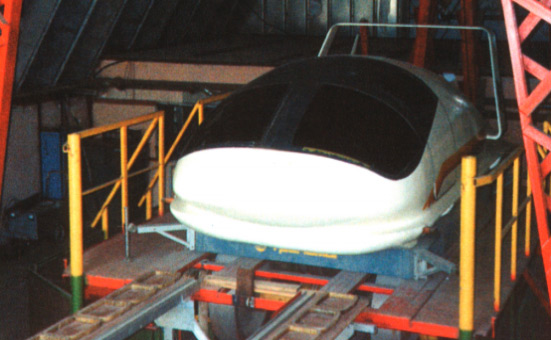 Autonomous energy systems using renewable energy sources are designed to supply electricity to individual houses, cottages, greenhouses, to power communications, for cathodic protection of pipelines, platforms and bridges, for charging electric vehicles and powering billboards, road and building signs, for water supply and irrigation management, for small businesses, for security and safety systems, for backup power of various facilities and autonomous structures, including in the field of national security and defense and in dealing with the consequences of emergencies.

The ITST of the NAS of Ukraine has been conducting research work on the creation of autonomous power supply systems using wind turbines, solar and integrated wind and solar power systems for the past 20 years. These works were significantly developed during the implementation of the pilot innovation project "Development and production of the latest autonomous integrated power supply systems using solar energy systems, wind turbines and energy storage." This project, as mentioned above, was implemented in accordance with the Resolutions of the Cabinet of Ministers of Ukraine dated 27.08.2002 №1244 and from 17.03.2003 №352 International Scientific and Industrial Corporation "VESTA", Institute of Transport Systems and Technologies of NAS of Ukraine carried out scientific coordination work on the implementation of an innovative project.

As a result, under the scientific and technical guidance of the Institute's specialists, an experimental base for research and development of autonomous power supply systems using renewable wind and solar energy sources was created, on which all elements of these systems were tested. In particular, an autonomous horizontal-axial wind power plant with a capacity of 5 kW with an original electromagnetic multipole generator on permanent supermagnets was designed, manufactured and put into trial operation. operation of photovoltaic installations for street lighting.

In addition, a tracker for solar panels has been developed, created and patented, which allows their current orientation to the Sun during daylight hours. Using the present invention, an integrated wind power system of 6.5 kW has been developed and manufactured, which is currently being tested as a stand-alone charging station for electric vehicles. 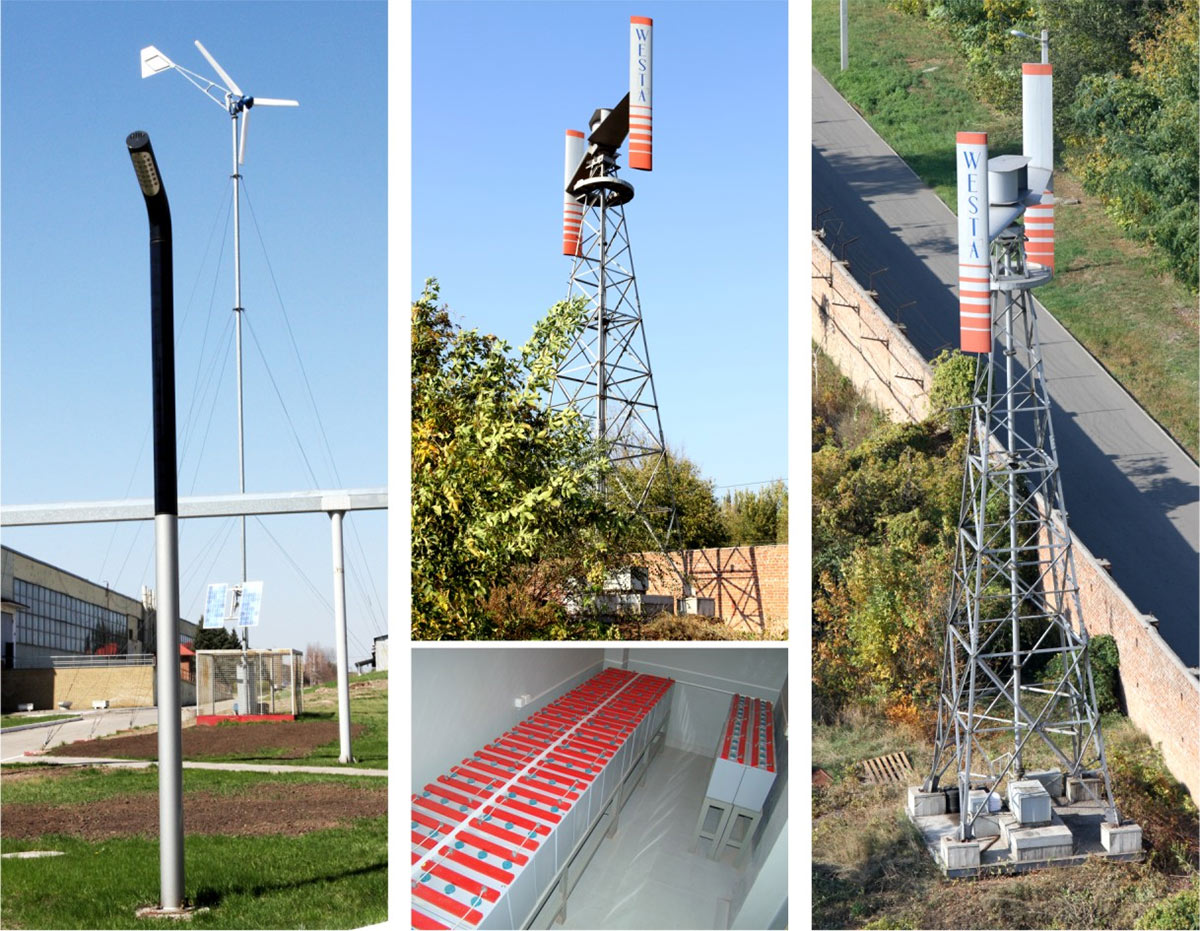 For the National Antarctic Center of the Ministry of Education and Science of Ukraine, the concept of an autonomous power supply system based on small-scale wind turbines (up to 30 kW) for the Ukrainian Antarctic station "Academician Vernadsky" has been developed. The climatic conditions of the Akademik Vernadsky station have been studied, the requirements for the autonomous power supply system have been developed taking into account climatic and operational factors, and the designs of wind turbines have been proposed. 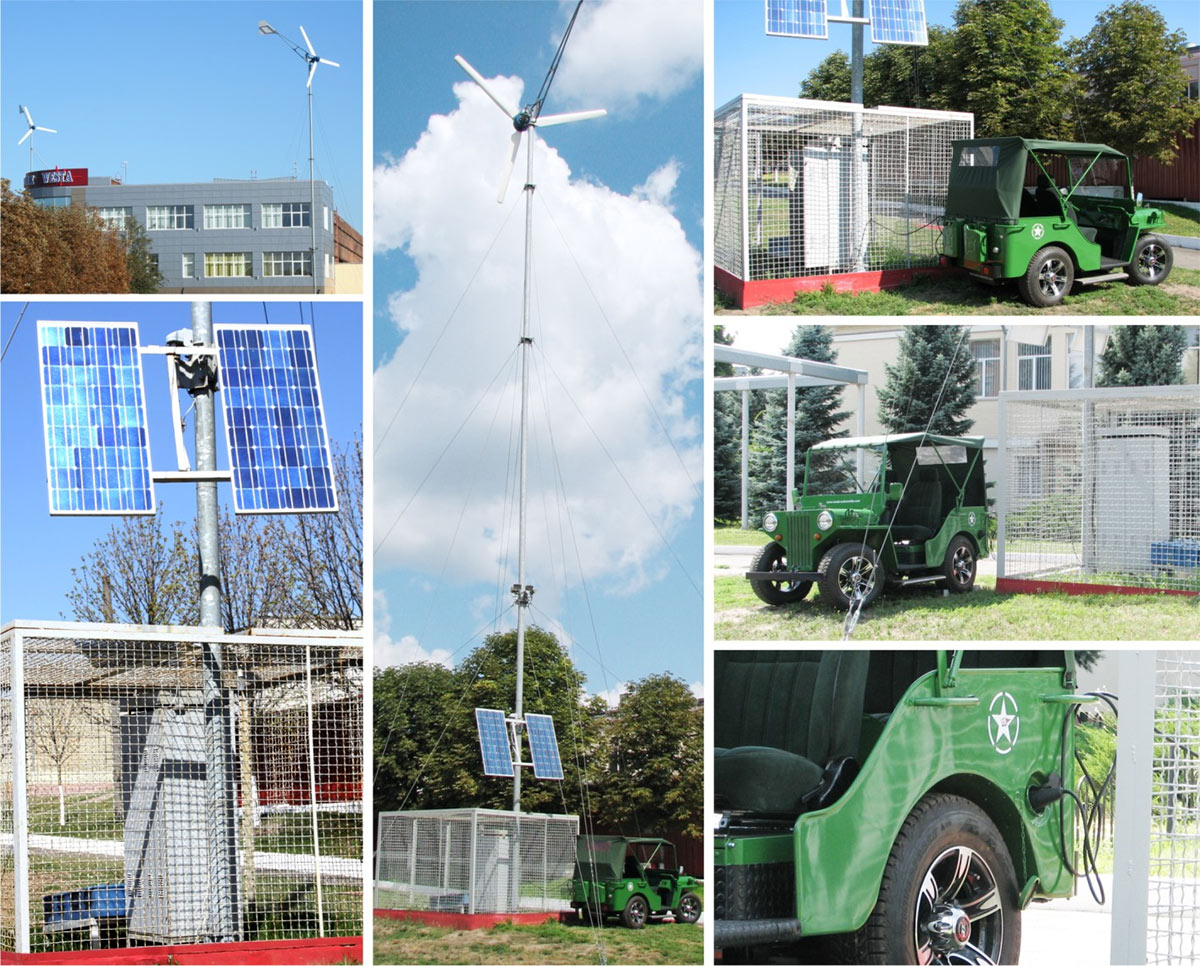 The Institute has developed a concept and started creating a set of energy support machines for use by the Armed Forces of Ukraine and units of the Ministry of Emergencies.

Energy support machines (MEPs) are mobile autonomous systems for generating, converting and storing electricity using unconventional energy sources that are integrated with automotive or tracked platforms. MEPs are designed to solve urgent problems of electricity supply to facilities, the provision of which is impossible either due to their remoteness from power lines, or when it is impossible to connect to them, or due to their power outage. Such energy supply facilities include, for example, checkpoints, repair facilities, field hospitals, telecommunications hubs, temporary facilities of the Armed Forces of Ukraine and the Ministry of Emergencies.

The mobility of the proposed energy facilities - MEP - is ensured by their integration with a car or tracked off-road platform, which may be, for example, a minibus, trailer or tracked platform of the tank type.

The MEP consists of:

It is planned to create MEP of small, medium and heavy classes. Small-scale MEP is based on the chassis of a minibus, for example, UAZ, medium - on the chassis of a heavy-duty trailer, heavy - on a crawler chassis, such as radio support vehicles anti-aircraft missile system "Buk".

When creating new automated high-tech industries, in particular, enterprises for the manufacture of batteries and dual-purpose batteries, one of the most important tasks is their quality and efficient energy supply. To this end, the Institute has developed and proposed for implementation the concept of an industrial energy park (see diagram).

The Industrial Energy Park is an innovative product protected by a patent of Ukraine.
In terms of content, it is a combined system of electricity and heat supply to AC and DC consumers with high power load and heat energy consumers with differentiated load, with control of the ratio of generated and consumed power in different modes.

The proposed solution is based on the task of creating a unified local energy system that operates, including with the use of renewable energy sources, integrated into an industrial complex with high energy saturation. This power system is connected to a centralized electrical system.

Rational set of renewable energy sources for Ukraine - a combination of solar and wind energy, as well as low-potential heat energy. Generating equipment corresponding to these types of energy is represented in the fleet by wind turbines, photovoltaic modules, solar panels and heat pumps.

This approach to energy supply is in line with the global trend of energy development, when the energy consumer also becomes an energy producer who uses renewable energy sources.

Since the energy produced by the local sector of the energy park with unconventional energy sources is used directly for the needs of the industrial complex, the problem of energy losses during its transportation to consumers is eliminated.
The central power and control unit of the power park is a deep input substation connected to the external power grid; the substation connects and switches all nodes and modules of the energy park, as well as optimizes the power supply of the entire industrial complex and its individual enterprises.

The substation is connected to the wind power system and the photovoltaic system through a complex of switching equipment and the storage unit - the battery station. The accumulator station gives the chance to create reserve stocks of the electric power and at the same time to serve as station of replaceable accumulators for in-factory electric cars.

In order for the contribution of renewable energy sources to energy saturation to be significant, the project will use complexes of wind turbines and photovoltaic modules of the megawatt class.

The central heating unit of the industrial energy park is a modern high-efficiency heating boiler house, which is supplemented by low-potential heat sources - solar collectors and heat pumps to heat the water entering the boiler room and directly to consumers. Thus, the principle of cogeneration is realized in the energy park, when electric and thermal energy are generated at the same time.
In general, the energy park is by its structure an energy industry, in the material part and management system of which the ideas of full and maximum efficiency, compatibility and coordination of energy sources are implemented.

The creation of an industrial energy park will reduce the cost of energy consumed by 20-25% and provide enterprises with reliable, highly efficient and high-quality energy supply, as well as give additional impetus to the use of non-traditional energy sources in Ukraine. 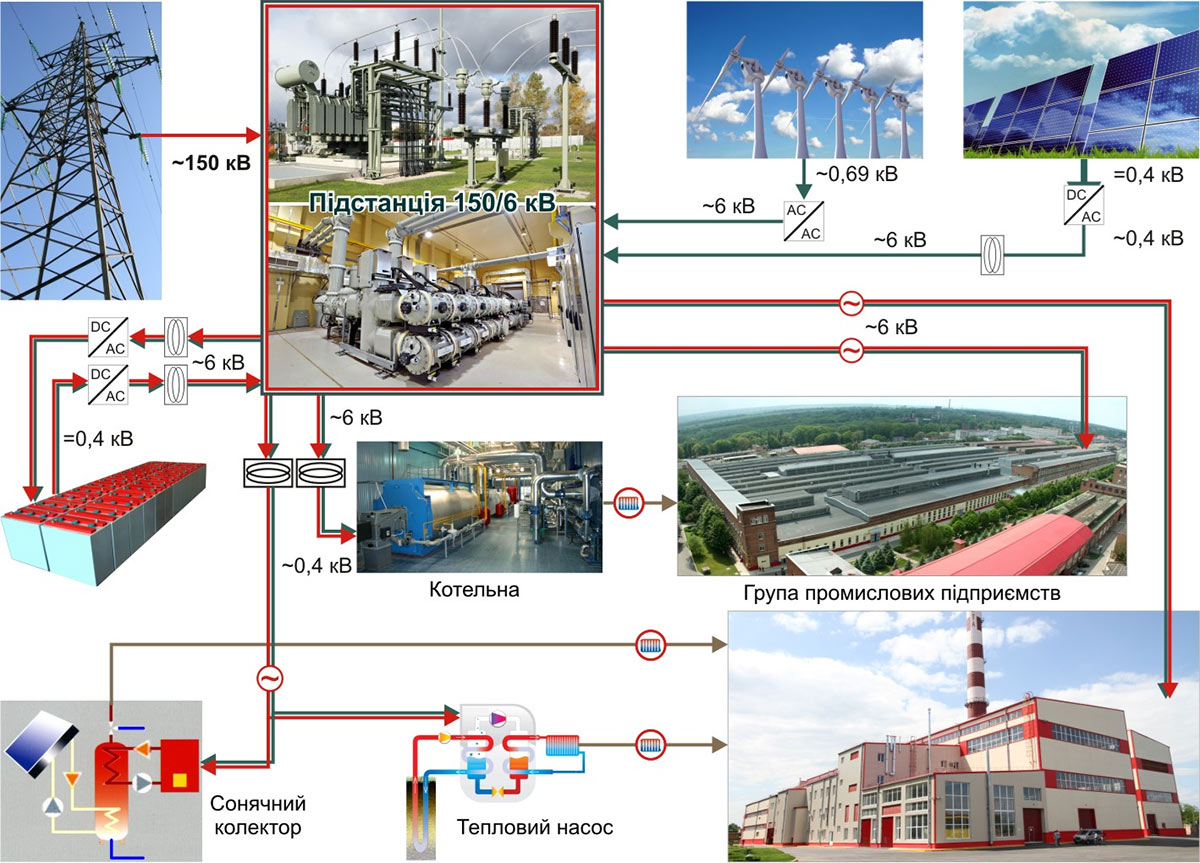 Plasma actuator is an electronic device that generates charged particles, which can be used to control the movement of air flows over streamlined surfaces. The latter can be:

Plasma actuator consists of two electrodes, which are separated by a dielectric and arranged in an uneven asymmetric order to form plasma - ionized gas formed from neutral atoms and charged particles (ions and electrons). As a result of electrohydrodynamic interaction between the discharge plasma and the surrounding gas there is a very efficient conversion of electrical energy into kinetic energy of gas flow in the near-surface layer, which allows to influence laminar or turbulent air flow over the streamlined surface without consumables.

The main advantages of plasma actuators: high reliability, simplicity of design, the ability to integrate them into aerodynamic surfaces, low energy consumption, the ability to control the flow in real time due to the high frequency of operation. All this determines the prospects of their use in aircraft to force the gas flow, reduce surface friction and, thus, to reduce fuel consumption and air pollution.

The Institute has developed a new mathematical model and a specialized package of computational hydrodynamics and electrodynamics based on the Navier-Stokes and Maxwell equations, which includes several differential models of turbulence to calculate stationary and nonstationary laminar and turbulent flows in the presence of low-temperature partial temperature. A study of the influence of the dielectric barrier discharge during the operation of the plasma actuator on the structure of the flow, which allowed to control the structure and separation of the flow in order to improve the aerodynamic characteristics of bodies of arbitrary shape. The results of these works can be used in the development and design of plasma actuators for civil and military aircraft.